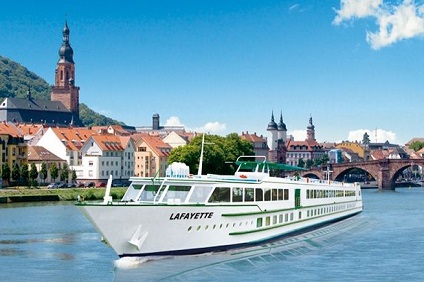 Discover breathtaking landscapes along 3 rivers: the romantic Rhine valley, the Moselle and the Main. Impressive and unforgettable, our cruise will let you discover unmissable cities, from old Strasbourg to the Cochem castle, via the Frankfurt Main Tower, the Niederwald monument and Heidelberg.

Strasbourg
Strasbourg is the capital and principal city of the Alsace region in eastern France. It is most widely known for hosting a number of important European institutions. It is also famous for its beautiful historical centre - the Grande Île - which was the first city centre to be classified entirely as a World Heritage Site by UNESCO.

Visitors to Strasbourg will enjoy the architectural delights of the Grande Île district including the Cathedrale Notre Dame and its Astrometric Clock, the Maison Kammerzell, Palais des Rohan and the Musee Alsacien. Also worth visiting is Petite France, the small area between the rivers just south of the Grand IIe. It is Strasbourg's prettiest and most photogenic streets and buildings, with half timbered townhouses leaning out over the narrow cobbled streets.

Frankfurt
Frankfurt is the business and financial center of Germany and the largest city in the German state of Hesse. The city is known for its futuristic skyline and the biggest German airport. Located on the river Main, Frankfurt is the financial capital of Continental Europe and the transportation centre of Germany. Frankfurt is home of the European Central Bank and the German Stock Exchange. Furthermore, it hosts some of the world's most important trade shows, such as the Frankfurt Auto Show and the Frankfurt Book Fair.

There are many attractions in Frankfurt. The downtown area, especially Römer square and the museums at the River Main, draw millions of tourists every year. Römerberg is the old centre of Frankfurt. It features various buildings and a church from the 14th and 15th century (the buildings were mostly destroyed during World War II but completely rebuilt afterwards). The Römer itself is the town hall of Frankfurt. Cafés and shops can be found at the square itself and in the vicinity. Next to the cathedral, at the Archäologische Garten, you can see the remains of the Roman settlements that gave this place its name.

Cochem
Cochem is a traditional German town with half-timbered houses and an exceptionally scenic location on the Mosel river in Rhineland-Palatinate, Germany. Situated in an area of outstanding natural beauty in the Mosel river valley, between the Eifel and Hundsrück. It is surrounded by high elevations, steep vineyards and typical wine villages, offering tastings, festivals and genuine hospitality.

Cochem, itself, is a showpiece gem and rated as one of the prettiest villages along the Mosel. Little seems to have changed for centuries. The town has many fine buildings, quaint cottages, black & tan guild houses and winding streets. The town square, lined with its half-timbered houses is particularly fine.

The imperial castle 'Reichsburg', high above Cochem, is the landmark of the city. From here, you will have a magnificent view onto the Moselle Valley. The castle itself boasts a collection of furniture from the Gothic and Renaissance periods as well as some fine reproduction pieces.

Mannheim
Mannheim is a city in southwestern Germany. It is located at the confluence of the River Rhine and the River Neckar in the northwestern corner of Baden-Württemberg. Mannheim is known as "die Quadratestadt" (the German word for "city of the squares) due to its streets and avenues of its central area being laid out in a grid pattern.

Attractions in Mannheim include the second largest Baroque castle in Europe and the water tower. The Reiss-Engelhorn Museum (REM) houses a permanent exhibit on world cultures along with an exhibition hall whose contents range from photography to astronomy. 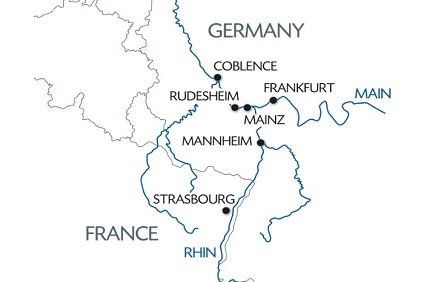