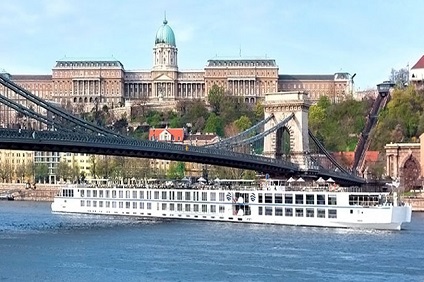 Day 1: Bucharest
Make your way to the hotel.

Day 2: Bucharest
Get to know the bustling heart of Romania's capital city with a full day to explore Bucharest on your own.

Day 3: Bucharest, Transfer to Giurgiu (Embark)
Bucharest is a fascinating combination of Communist grandiosity, elegant French-influenced 19th-century buildings and surprising survivors dating from the 1500s. Today in Bucharest you’ll enjoy a panoramic city tour or a walking tour in the old Lipscani district. Later, you'll travel via motorcoach to Giurgiu, where your ship awaits.

In the evening, a special Captain’s Welcome Reception and Dinner will be prepared for you.

Day 5: Vidin
Vidin is a port town on the Danube that once played an important role in medieval Bulgarian politics, as the great fortress Baba Vida attests. It’s your base for an unusual excursion today—a visit to the fascinating Belogradchik rock formations. Or you can head to a local’s home to bake a traditional Bulgarian dish called banitsa.

Day 6: Cruising the Iron Gates, Donji Milanovac, Golubac
Today’s main attraction will be the spectacular scenery along the Danube, as you cruise a stretch of gorges known as the Iron Gates. Later, head ashore to explore a Paleolithic site and an extraordinarily well-preserved medieval fortress. All along the way, history lines the banks of the river. Keep an eye out for Trajan’s Plaque, which the ancient Romans erected to commemorate the road they anchored in the steep cliffs above the water, and Golubac Castle, built in the 14th century and attacked successively by the Serbs, Magyars and Turks.

Unwind onboard as you cruise the breathtaking Iron Gates, an 83-mile-long (134-kilometer-long) stretch of scenic gorges that were cut through the Carpathian and Balkan mountains over eons by the Danube River. These gorges, which act as a natural border between Serbia and Romania, are among the most dramatic and beautiful sights in all of Europe. This was one of the swiftest and most dangerous stretches of the river before two dams were built: Iron Gate I and Iron Gate II. Construction on the dams began in 1964 and took 20 years to complete; they have dramatically altered the area’s landscape, raising the water level by 114 feet (35 meters) and drowning several islands and villages.

Day 7: Belgrade
Belgrade, the modern-day capital of Serbia, is one of Europe’s oldest cities, dating back some 7,000 years. Signs of its tumultuous history are visible everywhere, juxtaposed with the city’s vibrant modern-day present.

Day 8: Vukovar (Osijek), Batina, Mohács
Welcome to Croatia! This ancient country, which has made a remarkable recovery from a brutal civil war, is noted for its beautiful countryside and thriving folk traditions, as well as simple, delicious local rustic food. You’ll dock in Vukovar, Croatia’s biggest port, at the confluence of the Danube and Vuka rivers.

Day 9: Budapest
Located on opposite sides of the Danube, Buda and Pest each have their own distinctive character and allure. Explore this dynamic and multifaceted city with your choice of excursions—you can see it from a local’s perspective on our walking tour, cover more ground with a panoramic tour or “Let’s Go” with a guided bike ride. Vibrant Budapest, Hungary’s capital, offers an enchanting combination of East and West.

In the evening, a special Captain’s Farewell Reception and Dinner will be prepared for you. 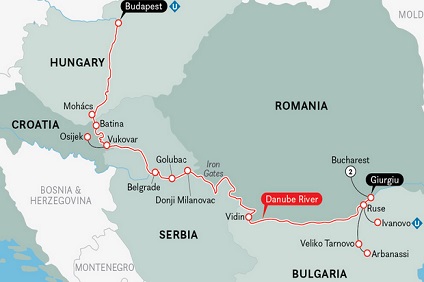