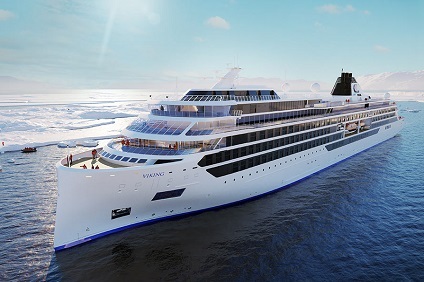 12 Night Cruise sailing from Tromso to Cork aboard Viking Polaris.

12 Night Cruise sailing from Tromso to Cork aboard Viking Polaris.

Trace the path of the Vikings on their journeys from Norway to the British Isles. From Lofoten’s jagged peaks, past the Shetlands and Hebrides and Scotland’s remote islands to Ireland’s green shores, you will explore the distinctive flora and fauna of some of the region’s most unspoiled coastlines. Learn about the ancient civilizations that once inhabited these locales, and delight in the cultures and traditions of the present day.

Day 1 Tromsø, Norway
Arrive in Tromsø and step on board your ship to begin your journey. Take some time to discover the northern city, the "Gateway to the Arctic," on your own.

Day 2 Lofoten (Reine), Norway
Experience the distinctive beauty of the Lofoten Islands, where the sculpting power of nature comes into sharp focus. Soaring, jagged peaks overlook sheltered bays in this remarkable archipelago of six main islands. The port of Reine provides opportunities for water-based exploration, such as zodiac landings and RIB cruises to spot sea eagles and other wildlife, along with a number of shore-based experiences.

Day 3 Lofoten (Vaerøy), Norway
Search for wildlife as you sail by RIB across turquoise seas that contrast the barren mountains and red-hued homes of fishermen that dot the landscape. Vaerøy has the mildest climate in the Arctic Circle and is a bird-watchers' paradise. Immerse yourself in nature as you witness sea eagles, puffins, cormorants and other species while you explore the Lofoten Islands and its surroundings from your Viking Expedition ship.

Day 4 Cruise the Norwegian Sea
As you cruise to our next port of call, spend the day savoring the amenities of what your ship has to offer. Indulge in Nordic-inspired spa treatments in The Nordic Spa, join a yoga session in the gym, listen to an enriching lecture or watch a documentary on our giant screen in The Aula theater.

Day 5 Shetland Islands (Lerwick), Scotland
The Shetland Islands archipelago is characterized by cultural traditions and dramatic landscapes. Drive through a rolling countryside, come face-to-face with Shetland ponies, explore the ruins at Jarlshof, perfect your photography techniques or join a hike through an incredibly scenic land. Experience the destination with one of our many included Viking exploration activities.

Day 6 Lewis & Harris (Stornoway), Scotland
Discover a dramatic island landscape, Gaelic culture and historic traditions. Although it may sound like two separate islands, Lewis and Harris are actually two parts of one island, with Stornoway, the largest town of the island group, located on the east coast. As you arrive, you will soon be amazed by the ever-changing mix of terrain; from mountains and lunar-like rocky plateaus to meadows, rugged coastlines and white-sand beaches.

Day 7 Iona, Scotland
Known as "The Cradle of Christianity" in Scotland, the tiny island of Iona is home to little more than 100 permanent residents. Visit this sacred isle and its 12th-century abbey, believed to be the origin of the Book of Kells. Learn about the age-old tradition of hand-weaving wool and create your own fabric of the Hebrides.

Day 8 Killybegs, Ireland
Killybegs is a natural harbor and the largest fishing port in Ireland. You can see many fishing boats, carrying freshly caught fish, in port from all over the world. The town has also long been associated with the tweed and knitwear industries. Since the 19th century, this trade became a cottage industry featuring homespun yarn as well as hand-dyed woolen and tweed textiles.

Day 9 Inishmore, Ireland
The island of Inis Mór (Inishmore), meaning the big island, is one of Ireland's most-visited destinations. It is internationally renowned with more than 50 different monuments of Christian, pre-Christian and Celtic mythological heritage. Hike or bike along island trails as you explore the fortress and other historic sites.

Day 10 Dingle (Ventry Harbour), Ireland
Dingle is known for its rugged scenery, hiking trails and sandy beaches. The peninsula is dominated by the range of mountains that form its spine, running from the Slieve Mish Mountains to Mount Brandon, Ireland’s second highest peak. Admire stunning scenery during a kayaking trip or explore the quaint harbor in the heart of Ventry.

Day 11 Scilly Isles (Tresco), England
According to Arthurian legend, the Isles of Scilly are all that remain of Lyonnesse, a land off Cornwall that vanished beneath the Atlantic. Meander through Tresco Abbey Gardens, where an astounding variety of subtropical plants flourish. Or explore Peninnis Head, a headland which is within the Isles of Scilly Area of Outstanding Natural Beauty.

Day 12 Cork, Ireland
Ireland’s charismatic second city is brimming with charm and has a long-standing history of challenging claims to authority, earning it the nickname of "Rebel City." In Kinsale, discover Cork's well-known culinary scene. Or visit Blarney Castle; kissing the Blarney Stone will bring the gift of eloquence.