The A, Rolling on the Rhine ex Frankfurt to Amsterdam

7 Night Cruise sailing from Frankfurt to Amsterdam aboard The A.

7 Night Cruise sailing from Frankfurt to Amsterdam aboard The A.

Amsterdam is just the beginning. On this cruise along the Rhine river, you’ll have three days to spend in this laid-back and forward-thinking Dutch hotspot, along with stops in the port-town of Hoorn, urban Cologne, and winegrowing Rüdesheim. You’ll spend several nights out on the town. And you’ll get your fix of famous artwork, incredible scenery, Dutch cheese, German beer and so much more on this in-depth look into European history and culture.

Frankfurt
Frankfurt is the business and financial center of Germany and the largest city in the German state of Hesse. The city is known for its futuristic skyline and the biggest German airport. Located on the river Main, Frankfurt is the financial capital of Continental Europe and the transportation centre of Germany. Frankfurt is home of the European Central Bank and the German Stock Exchange. Furthermore, it hosts some of the world's most important trade shows, such as the Frankfurt Auto Show and the Frankfurt Book Fair.

There are many attractions in Frankfurt. The downtown area, especially Römer square and the museums at the River Main, draw millions of tourists every year. Römerberg is the old centre of Frankfurt. It features various buildings and a church from the 14th and 15th century (the buildings were mostly destroyed during World War II but completely rebuilt afterwards). The Römer itself is the town hall of Frankfurt. Cafés and shops can be found at the square itself and in the vicinity. Next to the cathedral, at the Archäologische Garten, you can see the remains of the Roman settlements that gave this place its name.

Koblenz
Koblenz is a German city situated on both banks of the Rhine at its confluence with the Moselle, where the Deutsches Eck (German Corner) and its monument (Emperor William I on horseback) are situated. It is a historical city with remains dating back to 1000BC.

Koblenz boasts extensive defensive works, including forts crowning the hills encircling the town to the west, and the citadel of Ehrenbreitstein on the opposite bank of the Rhine. Since 1890, the city has consisted of the Altstadt (old city) and the Neustadt (new city) or Klemenstadt. Of these, the Altstadt is closely built and has only a few fine streets and squares, while the Neustadt possesses numerous broad streets and a handsome frontage along the Rhine.

Hoorn
Hoorn is a municipality and a town in the Netherlands, in the province of North Holland. It is located on the IJsselmeer, 35 kilometres north of Amsterdam. In late medieval times, Hoorn became rich through sea trade and fishing, making possible the construction of many of the picturesque buildings that can be seen today. Its maritime past is also reflected in the fact that Cape Horn is named after it.

Amsterdam
Amsterdam, the capital of The Netherlands is built around a concentric network of canals spanned by over 1000 bridges making canal cruises one of the most attractive ways of viewing the city. Many of the houses date back to the 17th century. These narrow-fronted merchants' houses are characterised by the traditionally Dutch ornamented gables.

The oldest part of the city is Nieuwmarkt, located near the first canals - Herengracht, Prinsengracht and Keizersgracht - built to protect the city against invasion in the 17th century. Today, Amsterdam's famous liberalism has survived in the city's 'coffee shops and thriving sex industry.

The city has also long been a centre of diamond cutting and it is still possible to see diamond cutters at work. Amsterdam has a booming cultural life, boasting 53 museums, 61 art galleries, 12 concert halls and 20 theatre. A special canal boat (the 'museum boat') links 16 of the major museums. In the local countryside it is still possible to see working windmills. There are annual events such as the Amsterdam Arts Week and the Holland Festival.

Ship
The A
Cruise line
U by Uniworld
Duration
7 nights
Departs
Frankfurt, Germany 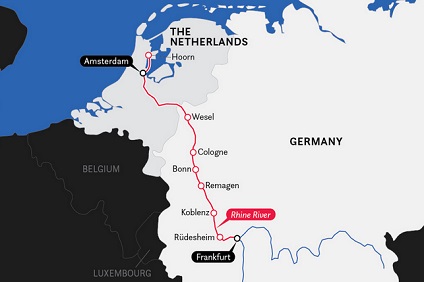