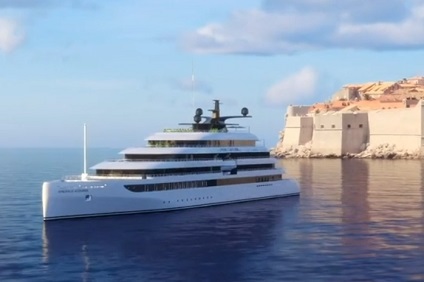 17 Night Cruise sailing from Nice to Rome aboard Emerald Azzurra.

17 Night Cruise sailing from Nice to Rome aboard Emerald Azzurra.

Bask amid the relaxing cultures of France and Italy, soaking up the sun-kissed shorelines and gastronomy delights of both countries. Visit the Italian and French rivieras, home of pastel houses, seafood restaurants and crystalline waters, as well as the vibrant islands of Sicily and Malta.

Day 2 - Menton, France
France’s Côte d’Azure is synonymous with outstanding beauty, and Menton is this famous region at its gorgeous best. Nestled between Monaco and Italy, the seaside town is a wonderful mix of unique architecture and luscious gardens.

Day 3 - Portofino, Italy
The unassuming village of Portofino provides another tempting taste of the Italian Riviera. Its colourful buildings and slower pace of life have made it an attractive hideaway for the rich and famous.

Day 4 - Portoferraio, Italy
One of the oldest towns on Elba Island, Portoferraio oozes Tuscan charm. A favourite among beach-lovers and history buffs alike, it’s known for enticing sandy shores and distinctive Medici forts, dating back to the 1500s.

Day 5 - Calvi
Follow in the footsteps of Christopher Columbus as you arrive in Calvi. This vibrant area of Corsica is said to have been the home of the intrepid explorer, and you’ll be sure to fall in love with its winding streets and quaint beaches.

Day 6 - Bonifacio, Corsica
The striking citadel heralds your introduction to Bonifacio. Established in 833, this charming Corsican port provides stunning views from its ancient fortress that, on a clear day, stretch all the way to Sardinia.

Day 7 - Porto Ercole
Perched on the coast of Tuscany, Porto Ercole is one of Italy’s hidden gems. Translated as the ‘Port of Hercules’, this sleepy bay is a scene of incredible architecture and local seafood that is an absolute delight.

Day 8 - Civitavecchia, Italy
Centrally located in the Italian region of Lazio, this 2nd century port is home to many of its original features, like the beautifully preserved Roman Dock and the 16th century fort.

Day 9 - Sorrento
A quaint resort credited with inspiring the works of Charles Dickens and Leo Tolstoy, Sorrento provides a romantic introduction to the Amalfi Coast. The historic town has spectacular views over the Bay of Naples, and its maze of cobbled streets is punctuated with cosy cafés.

Day 10 - Palermo
Your discovery of Sicily begins in the capital city of Palermo, a melting pot of elegant piazzas and even better pizza.

Day 11 - Palermo
The Normans referred to it as the “Kingdom of the sun”, it has been the prize of Roman, Byzantine and Greek settlers, all of which culminates in the wonderfully diverse nature of Palermo. From its grand Piazza Vigilena, with its revered Baroque structures, the colourful masterpiece of Capella Palatina to the bustling markets of Vucciria, it’s no wonder it has previously been named Italian Capital of Culture.

Day 12 - Trapani
Blessed with one of the most enchanting coastlines in Italy, Trapani is a serene side of Sicily. A heady mix of alluring landscapes, inviting beaches and historic intrigue, including the 18th-century Chiesa Anime Sante del Purgatorio, a church depicting the story of Christ’s Passion.

Day 14 - Valletta, Malta
Once described as “a city built by gentlemen for gentlemen”, the Maltese capital of Valletta in rich in landmarks and beautiful Baroque architecture. Its creation was a labour of love for the Knights of St John, but today it has blossomed as a UNESCO World Heritage and European Art City thanks to its wealth of museums, galleries and charming Barrakka Gardens.

Day 15 - Catania, Italy
Catania is another of Sicily’s prized gems, a magnetic collection of winding streets and elegant architecture. At its centre is the awe-inspiring UNESCO World Heritage-listed monastery of San Benedetto, a symbol of Catania.

Day 16 - Naples
Sat in the shadow of Mount Vesuvius, the unforgettable city of Naples possesses a passion to match its fiery neighbour.

Day 17 - Naples
The third-largest city in Italy, Naples does things very much in its own way. It is a sea of extraordinary art and culture, unparalleled cuisine and an unmatched history, all sat against the backdrop of one of Europe’s most iconic volcanoes. 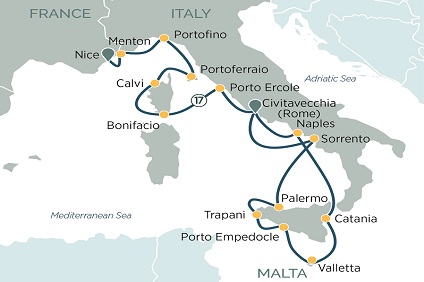