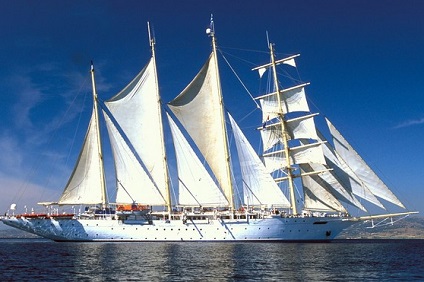 Cruise 9 nights from Malaga to Malta aboard the stunning tall ship, Star Flyer.

9 Night cruise sailing from Malaga to Valletta onboard Star Flyer.

Star Clipper is as fleet as the wind and as graceful as swans. This is a true clipper ship, reflecting the proud heritage in every inch of polished brass and gleaming brightwork.

Step aboard this unique vessel and discover a new age of sail, where the traditions of the past are happily married to the comforts and amenities of the present. Star Clipper ia a modern cruise ship in every way, created for comfort-loving passengers who also love the traditions and romance of the legendary era of sailing ships. Star Clipper is 360 feet long and carries just 170 guests in pampered comfort. Life aboard is blissfully relaxed, much like travelling on a private yacht. You’ll never feel confined, as the ship offers pleasingly spacious accommodation and expansive teak decks with ample space for relaxing and play. In fact, you’ll find that the ship offers more outdoor space per passenger than most conventional cruise ships.

Enjoy our convivial indoor-outdoor Tropical Bar and Piano Bar, and Edwardian style library where a Belle Époque fireplace glows with a warmth that reflects the friendliness and enthusiasm of Star Clipper’s hospitable officers and crew.

Highlights of this Cruise:

Malaga, Spain
Malaga's fortress palace of the Alcazaba and the Castillo de Gibralfaro are splendid examples of Moorish architecture. But it is in Granada that you can see the most romantic and magnificent expression of the Arabesque style in the glorious Alhambra Palace.

Almeria, Spain
The city of Almeria is Andalucia's most eastern capital. It is located at the foot of a mountain range. Not to be missed is the magnificent Alcazaba, an Arab fortress built by the Caliph of Cordoba, Abd-erRahman with three huge walled enclosures (in the second of which are the remains of a mosque, converted to a chapel by the Catholic kings). The Alcazaba is the second largest Muslim fortress in Andalucia behind the Alhambra in Granada.

Cartagena, Spain
The city's naval, maritime and historical museums provide insight into the 2,000 years this city has been a major port. It's now developing into a vibrant tourist attraction. The deep water harbor and walled town were used by Phoenicians, Romans and Moors prior to the Spanish navy. Visit Torres Park and the Castle of la Concepcion for the best views in the city.

Ibiza, Baleraic Islands, Spain
Ibiza is a place where people hang out because, except for the medieval walls, you could almost think it was the Med's version of Key West. But away from the hustle of town, some lovely beaches await.

Mahon, Menorca - Balearic Islands, Spain
Mahón is a municipality and the capital city of the Balearic Island of Menorca located in the eastern part of the island. Mahon boasts one of the deepest natural ports in the world and is known for its restaurants and bars. Towards the end of the 20th century, a refurbishment of its historic centre was made possible by income from tourism.

A traditional cheese made on the island (Queso de Mahón) is named after the city. Mayonnaise is also argued to have its origin and name from this Minorcan city.

Menorca is also known for its prehistoric sites; the earliest remains are from post Pleistocene age 3000B.C. Within the city limits of Mahon, is the "village" at Trepucò, one of the best prehistoric sites on Menorca.

Cagliari - Sardinia, Italy
Cagliari is the capital of the island of Sardinia, a region of Italy. It is one of the most interesting and attractive places in Italy with sporting and cultural events; museums, the tourist port, known as one of the best places for sailing, and a lovely mild climate throughout the entire year.

The Castello (old town) neighborhood is the first area to visit in Cagliari. It is the city's ancient fortification. The historic neighborhood is still partially enclosed by the bastioned walls. Two medieval towers in white stone stand along the bastion enclosure along with two city gates.

A sea of buildings outside the historic center of the city make up the new neighborhoods. Starting from the heart of Villanova, these areas were developed after the Second World War.

Gozo, Malta
The charm of Malta's sister island Gozo is immediately apparent Steeped in myth Gozo is thought to be the legendary Calypso's isle of Homer's Odyssey. It's green, rural and calm relying on fishing and agriculture as well as tourism. It is one of the Mediterranean's top diving destinations with an incredible range of shore and boat dives including reefs, caves and wrecks. There are also Knight's watchtowers, tiny chapels and beautiful peaceful beaches to explore.

Valletta, Malta
Valletta and its suburb town of Floriana are perched on the steep Sciberras peninsula jutting out into Malta's two deep natural harbours, Grand Harbour and Marsamxett Harbour. Valletta is the Islands' fortress city. Founded by the Knights of St John in 1566, it is known as the 'city built by gentlemen for gentlemen' ; a 16th century architectural masterpiece.

Valletta is very much a working, capital city; a bustling cultural centre and the administrative and commercial heart of the Islands. Walking around Valletta, you'll come across an amazing number of historical sites, squares, courtyards, gardens and any number of cafés to visit. The city is a delight to shop in: narrow side streets are full of tiny shops selling antiques, maps, books, prints and jewellery. 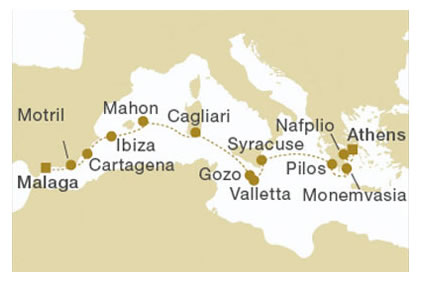 *Conditions Apply: All prices shown here are per person share twin in AUD, based on best available cruise fare at time of publication (15Jan21). Some cabins may have obstructed views. All prices based on cash payment - credit card fees may apply. Cruise deposit, amendment and cancellation conditions apply. Travel agent service fees may apply. Special conditions apply - please ask for full details at time of enquiry. All passports, vaccinations and visas are the responsibility of the travelling guest to secure prior to departure from Australia. Please note that the prices shown here are not shown in real time. While we endeavour to keep our pricing as up-to-date as possible, the advertised prices shown here may differ from the prices in our booking system at time of reservation. Offer ends 31Jan22 but may be withdrawn by cruise line at any time if unavailable and is subject to availability at time of booking. We reserve the right to correct errors without penalty.